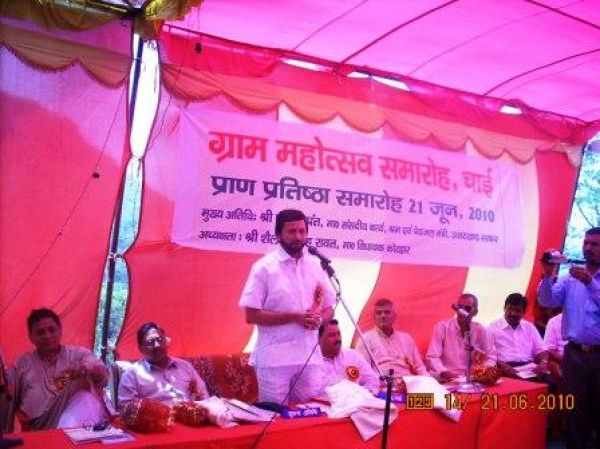 The occassion was the inaurgration of renovated Durga temple. On the first day a health camp was organized by the village committee for the area and a team of doctors from Himalayan Institute Hospital Trust (HIHT), Jollygrant, Dehradun came and also distrubted free medicines. There was also a blood donation camp.

On the second day…. there was a seminar on Hill development and in the evening a cultural show was organised.

The third day had rituals and other rites performed, which was attended by Uttarakhand state cabinet minister Prakash Pant.  He spoke on the subject of development in the state and appreicated the initiative taken by the village and on making a plateform like GRAMOUSTAV to raise the concerns of the people towards the issue of Health , education and hill development.

Besides the villagers from Chai and people from the neighbouring villages, many who have settled outside the area, district and the state came in large numbers.

It was a special occassion of many old people, to meet their relatives, friends and known people after a gap of many years. It was emotional time for many people from the area.