New Delhi: The three-floored house of Furkhan Malik in Gali No.4 of Chaman Park has been home to hundreds of women and children who managed to flee from the neighbouring Shiv Vihar with their life, and little more, for a week now. It would not have been possible without Malik’s children, 15-year-old Kaif and 20-year-old Sana. “My children have made me so proud,” Malik beams with joy, as he tries to arrange for the next round of meal for the now homeless residents.

Violence had erupted between people demonstrating for and against the Citizenship Amendment Act (CAA) across north-east Delhi on February 24, and Shiv Vihar became one the worst-affected locality. The next night it got worse. In the dead of the night, the residents of Shiv Vihar — which has now turned into a ghost town dotted with burnt houses, shops, cars and bikes — slipped across a large drain through multiple small bridges from the Hindu-dominated areas and tried to find shelter.

Most of them left without anything, even slippers, after they witnessed some of the worst incidents of violence and arson. The same night, Malik and his wife were stuck in Swaroop Nagar, in Malik’s warehouse. “We were told not to go home because that area was not safe.” Back in their home, their three sons, two daughters-in-law and a daughter were worried sick. Kaif and Sana had stayed up, in fear, not knowing when their parents would return. “We could hear gunshots and ‘Jai Shri Ram’ slogans. We knew homes were burnt down in the neighbouring localities. People were running around in our lanes, screaming for help,” said Kaif. 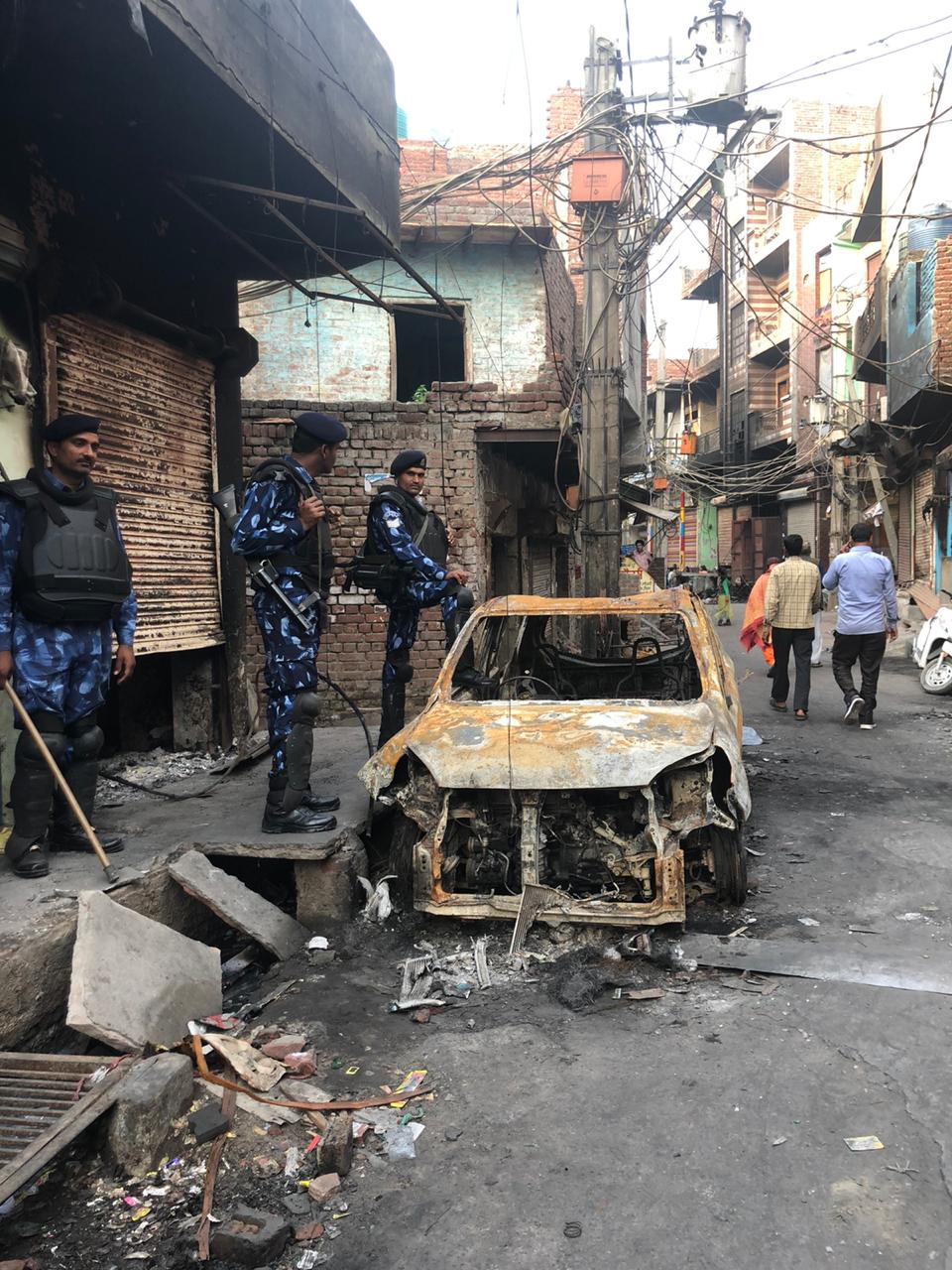 For four days, violence continued in the capital city as mosques were set afire, homes and shops were burnt, and Muslims were burned alive in their homes. (Adrija Bose, News18.com)

This is when Kaif and his sister Sana decided to open their door to hundreds of strangers. “Where would these people go? We had to let them in. Some of them were even injured,” Sana said. “The families who didn’t have any relatives or friends in this locality, we got them in,” Kaif said. Immediately after, Sana started cooking, a fare of simple dal and roti. “I kept cooking, one round after another as more and more people started coming in. I didn’t stop till morning,” the 20-year-old said. By dawn, there were 700 people inside Malik’s house. The next morning, the neighbours gathered to start arranging for food and clothes.

Every afternoon, a truck arrives to give packets of biscuits and chips in the same Gali No 4 lane to victims of the riots that have left thousands injured and 43 dead. For four days, violence continued in the capital city as mosques were set afire, homes and shops were burnt, and Muslims were burned alive in their homes, dragged out into the streets and lynched. In one of the rooms of Malik’s house, women sit and pray all day, often breaking down. Sana gives them company, sitting in a corner and consoling with a few words, “Allah pe vishwas rakho“. 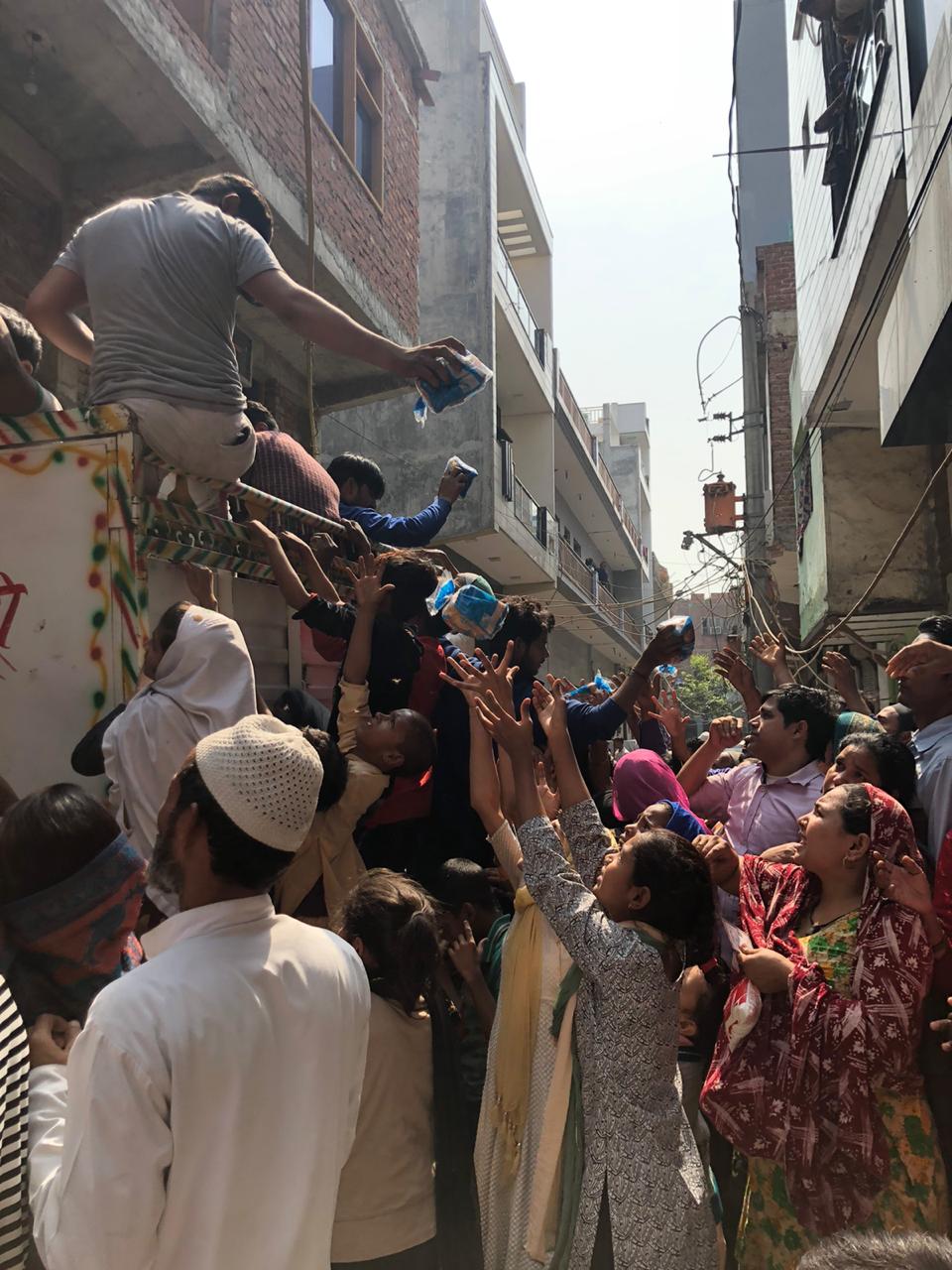 Every afternoon, a truck arrives to give packets of biscuits and chips in the Gali No 4 lane to victims of the riots. (Adrija Bose, News18.com)

Outside, in the living area, women share stories of tragedies and loss, all of them brutal. “I don’t know what is left in my house. Someone here who had gone back told me it hasn’t been burnt, but they have taken away everything,” Fakirah, 60, said. Arzoo narrated how a bunch of men “who were wearing police uniforms but did not look or behave like policemen” ransacked the local mosque.

Malik and his wife were able to finally come home on Saturday morning, once there was news of peace. “They had already told me over the phone that they had given shelter to the victims, but when I got home and saw them, I felt so proud of my children. They have big hearts,” he said. “We also have a big home,” he added. “Once the government camps are built, these families will move there,” Malik said.

The camp in Idgah Chowk is one of the many being set up by the Delhi government for riot victims. It hasn’t been completed yet. “It will be done in one more day we have been told,” Mailk said.

Meanwhile, in Shiv Vihar, narrow lanes have been blocked with charred remains of vehicles and pushcarts. “We are protecting ourselves from the Muslims who attacked us,” said a resident. The debris of stones that were pelted and shattered glass on the streets have mostly been cleared from the three streets surrounding the Madina mosque in Shiv Vihar, where a large number of people from the Muslim community resided until recently. But, what remains is burnt and ransacked homes, robbed bakeries and shops, a vandalised mosque and tragic tales of fleeing homes.