Skip to the content
By:
Explained Desk | New Delhi | 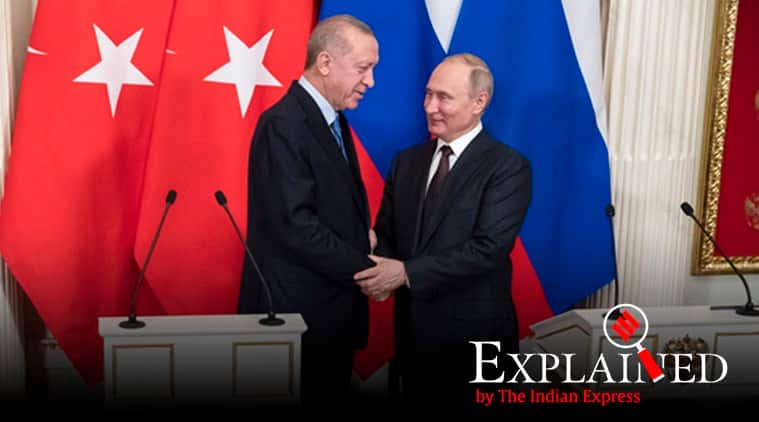 After a six-hour meeting Thursday, the Presidents of Turkey and Russia, Recep Tayyip Erdogan and Vladimir Putin respectively, agreed on a ceasefire deal to de-escalate the situation in Syria, where the country’s nine-year-old war is currently raging in the northwestern province of Idlib. In recent days, tensions have rapidly escalated in the Idlib region between the Turkish military and the Syrian government forces of President Bashar al-Assad, which are backed by Russia.

Several agreements to end the fighting in Idlib have collapsed in the past.

According to figures presented by the United Nations, since December, when the Syrian government launched an offensive in Idlib, 10 lakh people have fled hostilities. The province borders Turkey, and the latter has closed the frontier to try and seal itself from the waves of displaced refugees.

Erdogan said it was important to “ease concerns in the region”, while Putin expressed hope that the deal would “put an end to suffering of (the) civilian population and contain a growing humanitarian crisis.”

📢 Express Explained is now on Telegram. Click here to join our channel (@ieexplained) and stay updated with the latest

As part of the truce, which came into effect at midnight Thursday, the two leaders agreed to open a 12-kilometre secure corridor near the M4 highway — this road runs through Idlib — and hold joint patrols along it from March 15, reported Reuters. The deal signed between Putin and Erdogan comes into effect Thursday midnight. (Photo via Reuters)

Why the Erdogan-Putin meet is significant

Putin is among the central figures in the Syrian war, with Russian military assistance having enabled Assad to first stabilise and then take back territory from rebel forces.

Idlib remains the last battleground in the war and is among the few strongholds of the rebel opposition and other groups that have been attempting to overthrow Assad’s regime since 2011. For Turkey, which is presently hosting some 36 lakh refugees, more conflict in Idlib would only serve to displace more people, pushing them towards the Turkish border.

According to an Al Jazeera report, at least 59 Turkish soldiers have been killed in the region since Turkey launched its military campaign here. An attack by Syrian government forces on February 27 killed 34 Turkish soldiers, following which Turkey launched Operation Spring Shield on March 1. Since the attack, Russia had rapidly increased its military presence in Syria, sending more warships to the war-stricken country than its usual pattern.

In response, Turkey had increased the escort protocol for Russians passing through the critical Bosphorus Strait. Russia had also scrambled to fill the vacuum created by the departure of US forces from some parts of Syria in October.

Don’t miss from Explained | What should you do if you have coronavirus symptoms, travel/contact history?

The proxy fighting between Turkey and Russia had increased the possibility of a direct clash between their armed forces, Reuters reported.

For all the latest Explained News, download Indian Express App.