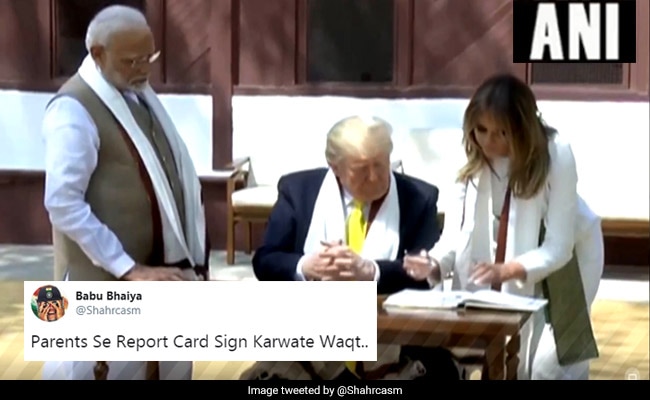 Donald Trump’s India visit has inspired a ton of memes.

US President Donald Trump was welcomed by Prime Minister Narendra Modi as arrived in Ahmedabad today for a two-day state visit to India. He was accompanied by wife Melania and a high-powered delegation which includes his daughter Ivanka Trump and her husband Jared Kushner. After landing, President Trump made a quick stop at the Sabarmati Ashram before travelling to the Motera Stadium, where a large crowd had gathered to welcome him.

Donald Trump’s first official visit to India has created a huge buzz on social media. The hashtags #NamasteyTrump, #TrumpInIndia, #TrumpIndiaVisit and #IndiaWelcomesTrump have been trending high since this morning. Among the flurry of tweets they have inspired are also a number of memes.

Twitter users have found a lot of meme material in Donald Trump’s India visit. From his reference to DDLJ and Sholay to his signature, everything has inspired hilarious jokes and memes on social media. Take a look at some of the memes here:

Donald Trump’s visit to the Sabarmati Ashram was the subject of many memes. “To my great friend, Prime Minister Modi, thank you for this wonderful visit,” the US President wrote in the visitor’s log.

I showed Trump’s signature to my pharmacist, he gave me medicines for 3 days. #TrumpInIndiapic.twitter.com/s40bMyUgip

Very gracious of Donald Trump to draw the design of Bandra-Worli sea link instead of his signature. #NamasteyTrumppic.twitter.com/LspkrwrqLN

Addressing a packed stadium, President Trump earlier today said: “All over the planet, people take great joy in scenes of bhangra, music, dance, romance and drama… and classic Indian films like DDLJ and Sholay… You cheer on great cricketers like Sachin Tendulkar and Virat Kohli.”

The statement led to several memes and jokes on Twitter.

Take a look at some of the other memes that are taking over Twitter:

Donald trump and Melania trump with their security guards in India

When Your American Friend Forgot Your iPhone Gift…#TrumpInIndiapic.twitter.com/mhNyY5LH5X

*Trump comes out of Airport*

Rikshaw Wala outside the airport: #TrumpInIndia#TrumpIndiaVisitpic.twitter.com/uCmE9Urcug

The Trumps have left for Agra to see the Taj Mahal. They will come to Delhi tonight and will start the operative part of the two-day visit tomorrow with trade talks.