Skip to the content
By:
Express Web Desk | New Delhi | 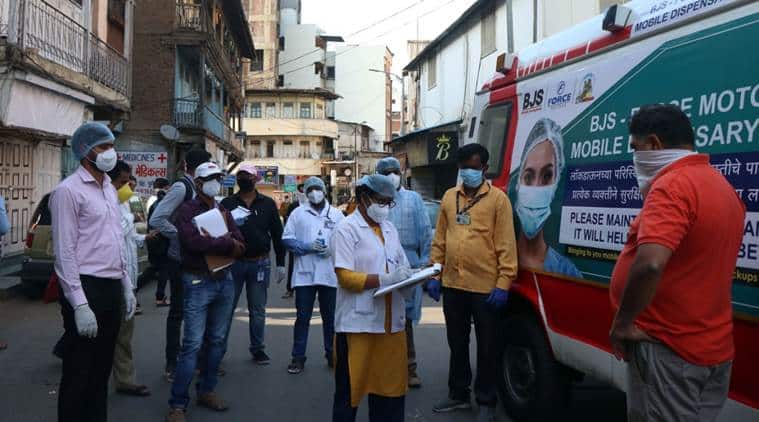 Health officials with Pune Municipal Corporation conduct a survey at Kasbapeth area amid concerns over the spread of coronavirus in the city on Thursday, (Express photo/Ashish Kale)

Coronavirus (COVID-19) Tracker: The number of COVID-19 cases in India on Friday jumped to 6,412, including 503 patients who have been treated and discharged and 199 deaths. Maharashtra has over one-fifth of these cases at 1,380. Tamil Nadu has 834 cases and eight deaths while New Delhi has registered 720 cases and 12 deaths.

Here is a list of COVID-19 deaths and cases in India (state-wise):

The total number of Covid-19 cases in the state stood at 348 with four deaths as of 12 pm on Friday. Six people have recovered so far. It is also among the four states with a high proportion of positive samples out of their total SARI (severe acute respiratory illness) samples.

Eleven coronavirus cases have been recorded in the islands so far. Last week, the Union Territory administration has turned its focus to the welfare of Particularly Vulnerable Tribal Groups (PVTG) in the region by blocking all non-essential traffic on Andaman Trunk Road (ATR), moving tribal groups deep inside forest areas, and providing masks and sanitisers to field workers.

Last week, Arunachal Pradesh reported its first case, when a 31-year-old man from Lohit District tested positive for the virus. The patient, who had attended the event at Nizamuddin Markaz, is non-Arunachalee, Chief Minister Pema Khandu confirmed on a video statement on Twitter. He added that the six who had travelled with him tested negative, but would be retested. Currently, he is being kept an isolation ward in Tezu town.

On Friday, Assam reported it first Covid-19 death after a 65-year-old man, who had attended the Tablighi Jamaat gathering, passed away due to “complications”. The total number of cases stand at 29 as of now.

Thirty-nine people have been infected while one person has died due to the infection, the ministry informed. Last month, a 38-year-old man passed away at a Patna hospital.

While the Union Territory has reported 18 cases so far, seven of them have recovered.

Days after a 16-year-old boy in Katghora town in Chhattisgarh’s Korba district tested positive for the coronavirus, eight more people from the area tested positive, taking the total to 18 in the state. Nine have been discharged so far.

Delhi saw 51 new cases of coronavirus and three more deaths on Thursday, taking the toll in the capital to 12. Of the 51 people who tested positive Thursday, 35 either have a travel history or came in contact with someone who had earlier tested positive.

So far, 720 people in the capital have tested positive for the virus.

Seven cases have been reported in Goa so far.

Goa Chief Minister Pramod Sawant last week announced that the state government will conduct a door-to-door survey across the state in which enumerators will go to people and check whether they are experiencing symptoms similar to that of COVID-19 and their travel history.

With eight new cases in Vadodara, the total number of cases rose to 308 on Friday. While 19 have died so far, 25 others have been discharged.

One more person tested positive for coronavirus on Thursday, thus taking the total number of Covid-19 cases in the state to 29, among whom two persons have died and two have recovered.

Eleven family members of a man from Hajin in Bandipora district, who died this week and tested positive for coronavirus, were among 24 fresh cases reported in the Valley on Thursday, officials said. Jammu and Kashmir now has 184 cases, of which 152 are from Kashmir.

A 72-year-old man died of coronavirus in Bokaro district, the first COVID-19 fatality reported in Jharkhand, a health official said on Thursday. With 8 fresh COVID-19 cases having reported within a span of 24 hours, the overall count in the state rose to 13-five in Bokaro, including the deceased, seven in Ranchi and one in Hazaribag, a health department official said.

The state has reported 207 coronavirus cases and six deaths so far. As many as 30 people have been discharged/cured.

The state has reported 357 cases and two deaths so far. Kerala Chief Minister Pinarayi Vijayan Thursday wrote to Prime Minister Narendra Modi to draw his attention towards the plight of Indian migrants in UAE. Stating that COVID-19 situation in the country is alarming, Vijayan requested PM Modi to take it up with the UAE government.

Ladakh has reported 25 (11 have recovered) cases so far.

A 62-year-old medical practitioner died of coronavirus in Indore on Thursday, taking to 22 the death toll in the biggest city in Madhya Pradesh, officials said. The state’s death toll is now 33, with eight deaths reported within a span of 24 hours, according to state officials.

By 4 pm on Thursday, the state reported 411 cases.

The state has reported two cases as of now.

After testing positive for the virus on March 24, the 23-year-old girl from Imphal West district, the first COVID-19 patient in the state, tested negative last Monday. The patient had returned to Manipur from the UK, where she is a medical student. Since then, she was under quarantined at the isolation ward of JNIMS.

Odisha has a relatively low coronavirus positive case load at 44 in about over 5,800 cases across the country. The state has so far reported one death and two recoveries, and tested 2,841 samples.

On Thursday, Chief Minister Naveen Patnaik announced that the statewide lockdown will continue till April 30.

The Union Territory has reported five cases so far

The state has seen 131 cases and eight deaths so far.

The state has recorded over 500 cases along with eight deaths so far. In Jaipur, 183 cases have been recorded so far.

At least 834 people have tested positive for the virus in Tamil Nadu. Eight persons have died so far.

There are 414 active cases in Telangana now. Twelve people have died so far.

The state has tested 274 individuals for the disease, and only one tested positive. The patient is recovering, Chief Minister Biplab Deb said, hoping she would get better soon.

Thirty-five cases have been reported in the state so far.

The state has recorded 410 cases so far with deaths of four persons.

There are 116 coronavirus cases in West Bengal. Five have died so far.