Coronavirus Outbreak LATEST Updates: The Himachal Pradesh Police on Monday said that one more local attendee of the Tablighi Jamaat event in Delhi has tested positive in the hilly state, and advised those who travelled from Delhi in state transport buses on 18 March and 4 pm and 9.30 pm, to self quarantine themselves after three other patients had taken the same route.

The Union Cabinet on Monday approved an ordinance amending the Salary, Allowances and Pension of Members of Parliament Act, 1954, which will result in the reduction of allowances and pension of the politicians by 30 percent from 1 April, 2020 for a year.

Assam Health Minister Himanta Biswa Sarma on Monday said that the government will take action against all those who had attended Tablighi Jamaat event in Delhi’s Nizamuddin Markaz and test positive for COVID-19.

“As per the lists we received from Centre and local info, we’ve names of 831 people from Assam who attended the Tablighi Jamaat event. 491 samples have been collected. We’ve contacted Mosque Committees to identify remaining people and collect their samples,” said Sarma.

A second notice was issued to Maulana Saad, the chief of the Tablighi Jamaat Markaz, under Section 91 of the Criminal Procedure Code, Delhi Police sources told ANI.

With the fresh cases, the total in the state reaches 294 and is likely to cross the 300-mark as more reports are expected later in the day.

India’s efforts have set an example before the world in tackling the coronavisus pandemic, said Narendra Modi. “India is one of the countries which understood seriousness of this disease and waged a timely war against it. India took several decisions and tried its best to implement them on ground,” said the prime minister.

UN Secretary General Antonio Guterres late on Sunday urged governments around the world to consider protecting women as part of their response to the deadly novel coronavirus pandemic.

“Violence is not confined to the battlefield. For many women and girls, the threat looms largest where they should be safest. In their own homes,” said Guterres in a statement.

“Over the past weeks as economic and social pressures and fear have grown, we have seen a horrifying global surge in domestic violence. I urge all governments to make the prevention and redress of violence against women a key part of their national response plans for Covid-19,” he added.

Singer Kanika Kapoor, who had earlier tested positive for the novel coronavirus after returning to India from London, has tested negative for the virus in her sixth report.

According to ANI, she has been discharged from Sanjay Gandhi Postgraduate Institute of Medical Sciences (SGPGIMS) in Lucknow.

A 52-year-old man died of coronavirus in Bhopal, taking the toll in Madhya Pradesh to 14, an official said on Monday. This is the first death of a COVID-19 patient in the state capital, he said.

The man recently tested positive for coronavirus and died at a private hospital where he was undergoing treatment on Sunday night, Bhopal Collector Tarun Pithode said.

The Indian Council of Medical Research (ICMR) said the rapid antibody based blood test for COVID-19 will be deployed by this Wednesday in clusters or containment zones and hot spots showing high incidence of confirmed cases.

Raman R Gangakhedkar, head of Epidemiology and Communicable Diseases Division of the ICMR speaking to The Hindu said that over all testing for COVID-19 using real-time reverse transcription polymerase chain reaction (RT-PCR), a laboratory technique combining reverse transcription of RNA into DNA, is increasing and that India will be approaching full capacity soon.

“At the same time, we are expecting delivery of Rapid Test kits (blood based) for use in response to COVID-19 situation. By Wednesday this should be up and running,” he said, adding, “We aim to start rapid antibody based blood test in clusters (with containment zones), and in large migration gatherings/evacuees centres.”

India’s toll from the COVID-19 outbreak surged past 100 with 27 patients succumbing to the infection in the past 24 hours, the highest number of casualties reported in a day so far on Sunday.

The number of coronavirus cases also went past 4,000 as states reported 541 fresh cases on Sunday, the fourth straight day of 500-plus infections in the country.

Lav Agarwal, Joint Secretary in the Union health ministry told mediapersons that 267 people have recovered from the infection till now.

Meanwhile, people across the country responded to Prime Minister Narendra Modi’s appeal to light lamps and candles for nine minutes to show solidarity in the fight against COVID-19. Modi, along with several political leaders and other celebrities, tweeted videos showing lamps at their residence —

In several parts of the country, people also burst firecrackers, leading to criticism from Twitter users, who pointed that firecrackers can damage the respiratory system, making people more susceptible to the novel coronavirus.

The active COVID-19 cases stand at 3,219, while 274 people were either cured or discharged and one had migrated, the ministry stated. However, a PTI tally based on figures reported by states directly showed at least 126 deaths across the country, while the confirmed cases reached 4,111. Of them, 315 have been cured and discharged.

According to the Health Ministry data, Delhi has reported the highest number of confirmed cases at 503.

As many as 26 new coronavirus patients were reported from Maharashtra on Sunday, taking the total such cases in the state to 661, a health official said.

Out of the 26 cases, 17 were reported from Pune, four from its neighbouring Pimpri Chinchwad township, three from Ahmednagar and two from Aurangabad, he said.

Asked about any new cases from Mumbai, the official said, The figures are being verified, hence Mumbai figures will be released later.” 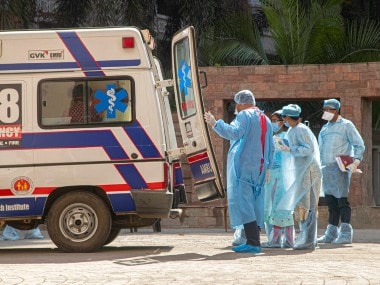 Simultaneously, the number of deaths caused by coronavirus infection rose to 13 with two persons succumbing to the deadly virus.

Among cities, the state capital led the chart by recording the highest number of 23 new cases in the last 24 hours, which took its tally to 40 so far.

As many as 62 COVID-19 cases were reported in Telangana, taking the total number of cases in the state to 289, the state government said.

No death occurred in the state and the number of people who died due to the virus continued to remain at 11, it said.

Thirty three people have been discharged, a media bulletin said.

No evidence of COVID-19 being airborne disease, says health ministry

Asserting that there was no evidence that coronavirus was an airborne infection, the health ministry also said the rate of doubling of COVID-19 cases in India is 4.1 days currently, but if the cases linked to the Tablighi Jamaat congregation would not have happened, it would have been 7.4 days.

“If it was an airborne infection then in a family — whoever has a contact — they all should come positive because they are living in same surrounding as the patient and the family is breathing the same air. When someone is admitted in hospital, other patient would have got exposure (if it was air borne) but that is not the case,” an official of the Indian Council of Medical Research said.

Unsure of what turn the COVID-19 pandemic will take in India, various key ministries and departments have cautiously started to chalk out re-emergence plans and strategies to come out of the 21-day nationwide coronavirus lockdown. Globally, the pandemic has claimed more than 65,600 lives gand inflicted over 12 lakh people

Meanwhile, the government has directed all district heads to ensure seamless functioning of pharma units making devices and medicines.

Union HRD minister minister Ramesh Pokhriyal ‘Nishank’ said a decision on reopening of schools and colleges will be taken on 14 April after a review of the coronavirus threat in an indication that the 21-day lockdown could be lifted as scheduled.

In an interview to PTI, he said the safety of students and teachers is of utmost importance to the government and his ministry is prepared to ensure there is no academic loss to students if schools and colleges needed to remain shut beyond 14 April.

The focus of the Central and state governments currently appeared to be on two key aspects —continuing with efforts on a war footing to contain the fast-spreading virus, and working on exit and “staggered re-emergence” from the lockdown.

During his interaction with chief ministers last week through video conferencing, Prime Minister Narendra Modi had pitched for formulating a common exit strategy to ensure staggered re-emergence of the population once the lockdown ended.

While making it clear that a decision on how and when to restore passenger services will be taken in coming weeks, sources in the Indian Railway said several proposals were being looked at as it was gearing up for the end of the lockdown on 14 April.

From making passengers wear masks to using the Arogya Setu app to check their health status before allowing them to travel and encouraging social distancing on board are a few proposals that are being looked at, sources said.

In continued efforts to fight the virus, Cabinet Secretary Rajiv Gauba instructed district level officials to ensure that pharma units making devices and medicines run seamlessly. The direction came a day after India put curbs on exports of diagnostic kits with a view to discourage shipments and meet domestic requirement.

Meanwhile, the prime minister spoke to several leaders, including his predecessor Manmohan Singh, Congress chief Sonia Gandhi and former president Pranab Mukherjee, on the situation arising out of the novel coronavirus pandemic.

The prime minister will also interact with floor leaders of various political parties via video conference on Wednesday.

With a rise in number of coronavirus cases in the national capital, Delhi Lt Governor Anil Baijal has directed the health department to identify private hospitals which can be taken over by the government, official sources told PTI.

They said the government has limited resources and hence ICU wards, beds and other facilities of private hospitals can be used to deal with the increasing numbers of coronavirus cases.

Officials have been asked to prepare a list of private hospitals that can be taken over if needed.

“In a recent meeting, the LG directed officials to prepare a list of private hospitals which can be taken over by government in case a need arises and their infrastructure can be used to treat COVID-19 patients. The government will provide treatment to coronavirus patients admitted at these hospitals,” a source said.

China has reported 30 new cases of the novel coronavirus, including five locally transmitted infections, even as nine of the 13 administrative districts of virus-hit Wuhan city were declared low-risk areas’ signifying a gradual return to normalcy, officials said on Sunday.

China’s National Health Commission (NHC) in its daily report said other than the 30 new confirmed COVID-19 cases reported in the mainland on Saturday, 47 new asymptomatic cases were also reported.

The NHC said 1,024 asymptomatic cases were still under medical observation, including 244 from abroad.

Asymptomatic coronavirus cases are those who test positive for the virus but do not show any symptom and have the potential to cause sporadic infection clusters.

Three deaths were also reported on Saturday — all from virus epicentre Hubei Province — taking the coronavirus death toll in China to 3,329 people.