New Delhi: A week after losing her home, 55-year-old Fariqa breaks into a dance at the makeshift camp in Chaman Park, Mustafabd. She claps while she moves around the room that is now “home” to nearly 700 women and children. Amid the sobs and shared tales of loss, Fariqa announces, “Meri bakriyaan zinda hai (My goats are alive)!”

Fariqa’s daughter Salma has managed to console her grieving mother for a few moments with an act that everyone in that room was scared to perform – going back home. As Muskan, Pari and Sultan — Fariqa’s three beloved goats– are fed greens by the locals of Mustafabad, the 33-year-old who escaped from a mob of rioters narrates how difficult it was to go back home in the riot struck neighbourhood of North East Delhi’s Shiv Vihar. “I was very scared, at every step I felt someone might attack me. But thankfully, I did not encounter any mobs,” she says, still heaving and panting. When Salma went back home, she was relieved to find that it hadn’t been burnt. “But everything had been looted,” she says. Luckily, the family’s three goats that were tied to the pole at the back of their house, survived the violence. “They had not hurt the goats. I untied them and brought them back”.

Salma doesn’t want to return to that neighbourhood, again. “When I went back, I could hear jeers and taunts. These were the same families who had lived peacefully with us for decades, had come to our house to eat on Eid. They had all turned hostile.” When Salma asked for a lock from her neighbours to replace the one that had been broken, they refused. “While the elders sat outside their homes with their heads hung, the young children and teenagers called out communal slangs and asked me to leave the street.” One of them even threatened to kill her goats if she did not leave.

“After a week of tears, my mother finally has a smile on her face. Her beloved goats are back,” Salma says, her brow gleaming with pride. “They had not eaten for three days,” Fariqa says even as she inadvertently recalls the night of terror.

On February. 23, the third day of one of the most severe cases of sectarian violence Delhi has seen in decades, sparked by clashes over India’s controversial new citizenship law, was at its worst. A mob of masked and helmet wearing men swept into the mixed neighbourhood of Shiv Vihar in northeast Delhi, armed with staves, hockey sticks, stones and locally made petrol bombs. Fariqa was on her way home with her grandchildren after their school examination when mobs started to gather. “They were pulling the girls’ dupattas,” Salma recalls, weeping. Fariqa and her granddaughters hid inside a basement of a house, close to hers. The 55-year-old remembers the voices that left her shaking– “You have voted for Kejriwal. You want Azaadi. Now go call Kejriwal!” She went home when the mob finally left. Fariqa and her family of 12 left their home that same night after mobs burnt down a mosque in the neighbourhood. “I didn’t even wear my slippers. We ran for our lives,” she says. Nearly ten days after the riots, some of the families are going back to check what they have lost. In the majority of cases, it’s everything.

“I got back the Quran,” Fatima chimes in. She and the women who sit around her inside the camp room share a moment of joy. “This is going to be my home now,” Fatima says, as she holds the holy book tight.

When Zeenat went back on March 1 to check on her home, she asked the police to accompany her. She said that the presence of police was to ensure she didn’t get attacked. She then found that the family-owned bakery–Mohd Salim Bakery– in Shiv Vihar’s 25 Foot road, had been ransacked and looted. The floor above the bakery where Zeenat lived with her husband and family had been broken into as well. The cupboard hung wide open, the lock lay discarded on the floor. A metal box that was filled with jewellery, cash and clothes that a relative had kept there for safekeeping for their daughter’s wedding was bent out of shape. 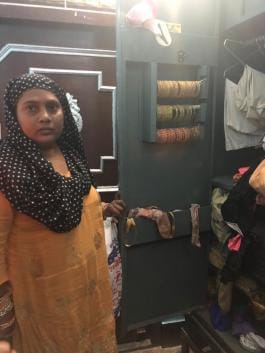 (Zeenat stands beside a ransacked almira inside her home in Shiv Vihar. | Image credit: Adrija Bose)

Zeenat estimates the family’s loss is close to Rs 3 lakh. As she scrambles through the empty boxes, she finds two pieces of earrings. “They must have forgotten to take these in the rush.” Zeenat’s brother-in-law says they have filed an FIR. But the police, he adds, is “unresponsive”. “They have no idea who looted us or when we can get our belongings back. We don’t know when we can even return home. I want the government to provide compensation for what we have lost. They need to assure us that we can safely return home,” he says.

But most former residents of the Shiv Vihar’s 25 Foot road and Madina Gali haven’t stepped back to their former street in fear of being abused, attacked or even killed.

On 26 February, when Md Jamaluddin and his brother Md Nizamuddin reached Delhi to find out that all the Muslim families had left Shiv Vihar, they decided to go home to bring back their clothes. Both the brothers were attacked. On Wednesday, Jamaluddin succumbed to his injuries taking the death toll to 53. Nizamuddin is seriously injured and is being treated in GTB hospital.

In the Eidgah camp in Mustafabad that has been set up by the Delhi government that’s currently sheltering over 2,000 riot victims, most of them from Shiv Vihar, the mere mention of going back home makes the air tense. And the tale of the two brothers who were attacked even after there was news of ‘peace’ does nothing to soothe the fear.

“My three-month-old son has had a fever for the last three days. I can’t go back home to even bring his cap or his socks,” says Yasmin, as she sits in one of the tents in the camp, waiting for the volunteers to serve lunch. “I don’t know when we can go back home, or if we ever can.” Yasmin’s husband Shan Mohammad was attacked during the riots, suffering a gunshot wound on his leg. “Our home is gone. Everything is gone,” she says.

Back in Shiv Vihar, a worried Md Alam, whose house in the 25 Foot road was burnt down, is looking for his last remaining property– his autorickshaw. Md Alam had left his home in Shiv Vihar with his wife and two children during the riots. The basement of a mosque in Chaman Park is now the family’s home. “My rickshaw is in the parking lot in the next lane. I wanted to check if it’s still there but the RAF force didn’t allow me to go there,” he says. If the rickshaw is gone he would have no more means of income left. “I’m a poor man. Even my home is gone now,” he says, adding, “I am praying my rickshaw is safe”.

As Md Alam walks past the bylanes that he fears he may not be able to come back to, he spots a known face behind the pushcarts turned into makeshift barricade that the Hindu families in the neighbourhood have put up. They say it is to save them from the “Muslim rioters”.

“The residents here have put up these barricades. We can’t do anything about it,” a RAF personnel remarks. Md Alam and the man exchange a smile and a fleeting handshake. The man continues to stand behind the barricades protecting his home as Md Alam leaves his behind, once again. 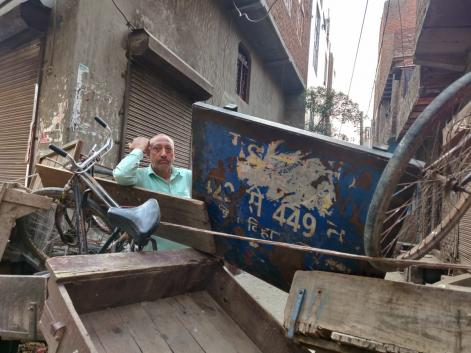